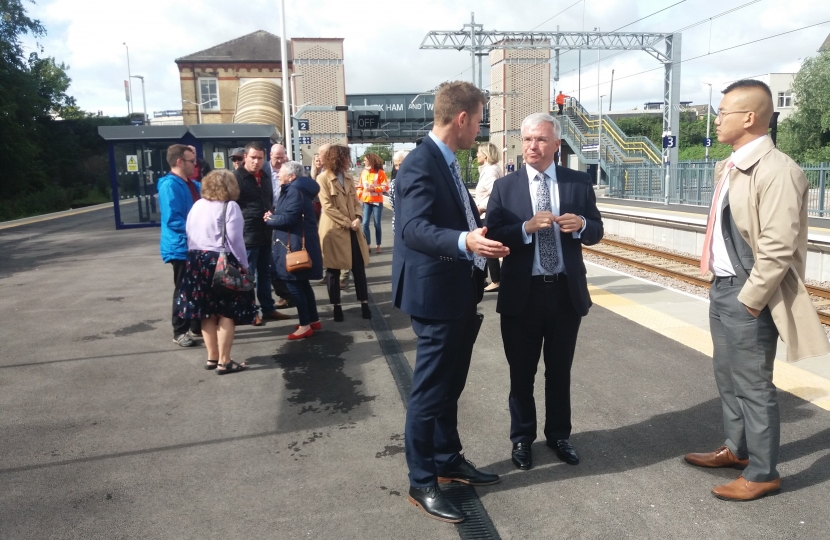 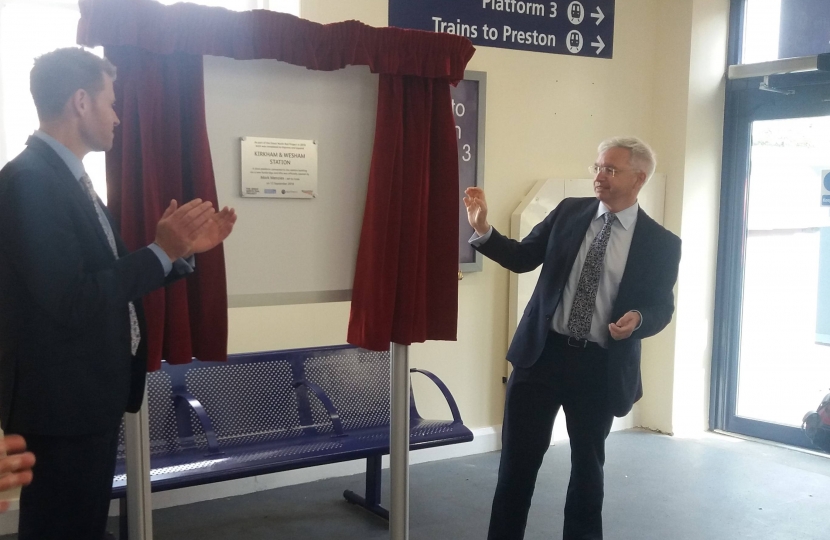 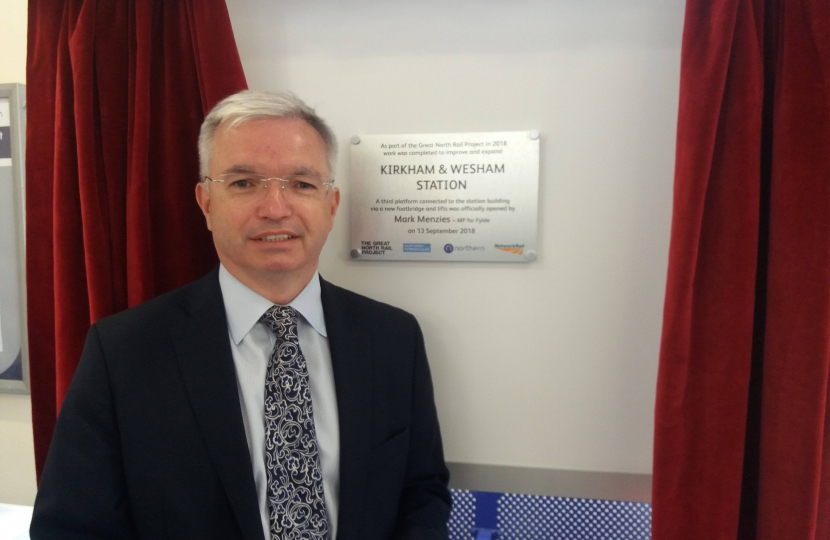 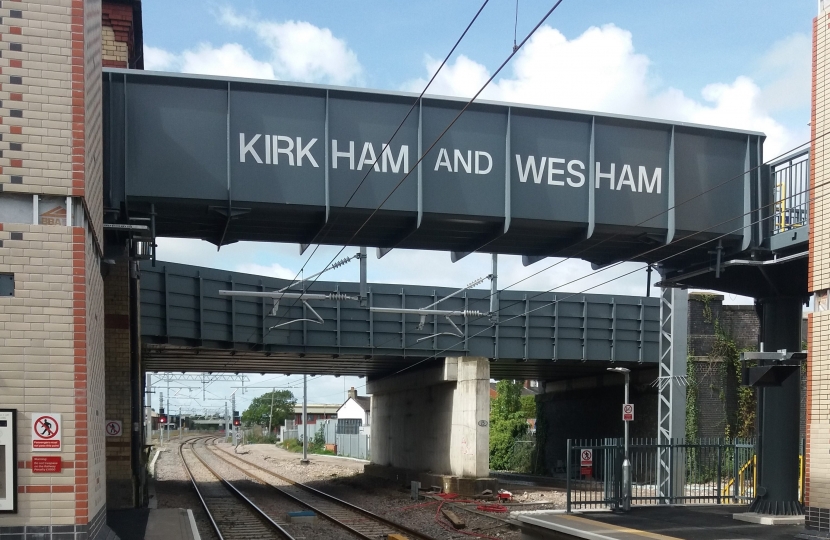 I have campaigned for improvements to the South Fylde line, serving Kirkham, Lytham, St Annes and through to Blackpool South ever since I was elected.

I wanted to see vast improvements at Kirkham Train Station, particularly in relation to access to the platforms, increased frequency of service on the line, and much-improved rolling stock.

I'm delighted to say we have secured some real investment on the line - but there is plenty more to do and I am still lobbying ministers and pressing the case for the line, which serves one of the biggest tourist attractions in the country, Blackpool Pleasure Beach.

I have lodged a full Restoring Your Railway bid to double train services on the South Fylde line, along with Blackpool South MP Scott Benton.

We joined forces to put together the bid for a passing loop on the line, which would allow for a service between Preston and Blackpool South every 30 minutes. The bid was handed to the Department for Transport on June 19, 2020.

The scheme was lodged with the full support of Northern Rail, Rail North, Transport for the North, Lancashire County, Blackpool and Fylde councils, as well as passenger, community rail, and business groups.

Ever since I was elected as Fylde MP I have called for a passing loop on this line. It is vital we improve services to make this line viable for commuters and students to use. For too long we have been short-changed on our railway.

Too many services have been running late and too many are cancelled. The potential of a two-hour wait between trains means many people will not even consider using the line.”

On top of the three per cent of services that were cancelled, we have some 173 services in the past 12 months which turned back to Preston early and did not reach Squires Gate, Blackpool Pleasure Beach or Blackpool South.

That is the equivalent of the loss of nine and a half days’ services. We must have a better rail system to Blackpool South.

The bid involves laying around three miles of track between Lytham and St Annes stations, the creation of a new rail platform at Ansdell and Fairhaven Station, the installation of signalling along the line, and potential platform changes at Preston Station. There is scope for improvements to St Annes and Lytham Stations, should Network Rail decide it would rather include those stations within the passing loop – but that would be decided further along the process.

Three feasibility studies have been carried out on the line to highlight the need for improved services.

I want to see the frequency of trains on the South Fylde line increased.

One train per hour is not good enough, but is all that can be accommodated at present given the line is actually a long siding between Preston and Blackpool South.

I have raised this issue several times with ministers and rail bosses and my calls are gaining traction.

I met with rail minister Andrew Jones in November 2018 to urge him to back plans which could double services on our line.

He and senior officials from the Department of Transport met with me to talk about the South Fylde line after I raised the matter in Parliament.

It was a very productive meeting in which I outlined the overwhelming case for a passing loop on the South Fylde line. A passing loop would bring about an increase in capacity and frequency of service on the line, but it would also ensure trains would be more effectively aligned with outgoing and incoming services at Preston.

As a result of my previous work on this, a study is now being undertaken to look at the costs and benefits of the scheme.

The minister has asked to be kept fully informed of the outcome of this work, which I hope will enable us to get this project finally signed off.

I was delighted to unveil a plaque at the reopening of Kirkham and Wesham station in September 2018 following a multi-million revamp.

The station now has new track, a new platform and two lifts serving them.

I lobbied ministers and rail bosses for these lifts since I was elected; the huge flight of stairs was no use for the elderly, anyone with a disability, anyone with shopping or a pushchair.

The changes mean this station is finally accessible for everyone and I am very pleased at the standard of work.

I met with Network Rail and Northern Rail managers throughout the project.

The station has also benefited from a new track layout thanks to the electrification of the Blackpool North line which passes through the station. This means trains on the South Fylde line do not have to wait for those from the North to pass and vice-versa.

The job here is not quite done yet though; I want to see more parking created at the station and the works have revealed a large swathe of land which would be ideal for a car park.

Talks are now ongoing between my office, Fylde Council, Northern Rail and Network Rail as to the feasibility of creating a car park.

I want to see residents around the station able to park outside their own homes, and to see surrounding roads safer. This car park would benefit passengers and local residents alike, and I will keep up pressure on all parties to press for a car park at the station.

The rolling stock on the South Fylde line is completely unacceptable. I have continually called for improvements to be made and, I am pleased to say, these calls have been heeded.

The much-hated Pacer trains, based on flatbed truck designs and which still deposit toilet waste on the lines, will be gone late in 2019. They have no place on a modern railway.

In April 2016, Northern announced it was investing £580 million in 98 new electric and diesel trains.

Hundreds more trains are being refurbished and rebuilt and all should be on the tracks by December 2019.

I have called on rail bosses to improve standards on the South Fylde line several times, and I was delighted when this announcement was made.

The electric trains will obviously not run on the South Fylde line, but I hope to see the new and refurbished diesel trains serving the constituency.

Northern has told me: "The new trains, and the technology on board will require a completely new maintenance regime and while the new trains are being built Northern will be making major updates to some of its depots and training the employees who will be undertaking that work. In addition, all of Northern’s on-train crews need to be trained, ready to take the units into service in December 2018."

These trains are better for the environment, cleaner, more comfortable, have more facilities, and will improve travel for us all. I expect rail user numbers to increase as the dreaded Pacer train leaves the lines for good.

Following lobbying of ministers and rail bosses, I am pleased to see all stations being improved along the South Fylde line.

Along with all of the improvements at Kirkham and Wesham, ticket machines are being installed at every station. There have been some physical improvement works to stations along the line, and our In Bloom teams have worked wonders to plant up many of our stations.

If you have an issue with any of these stations, please get in touch and I will take the issue up with the relevant authorities.