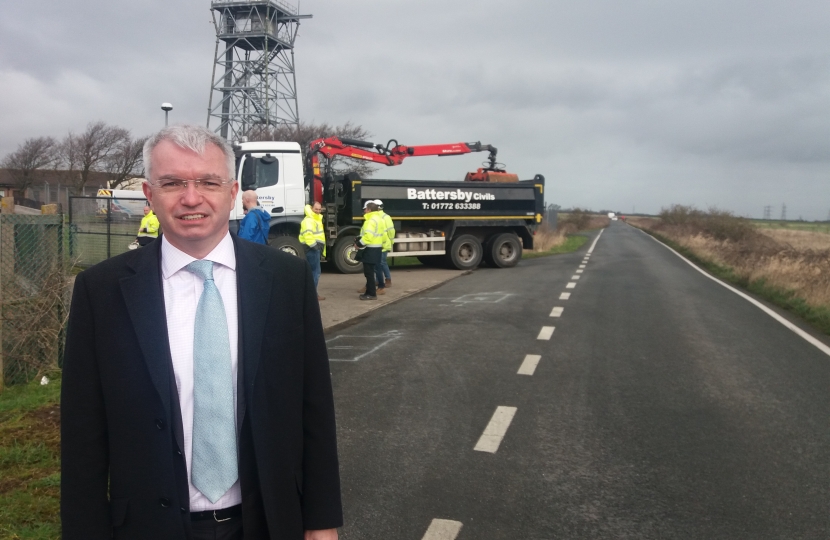 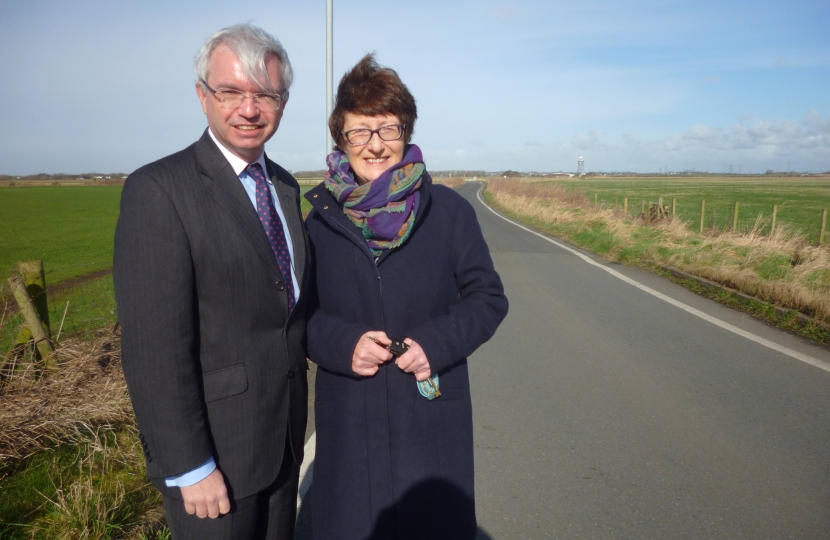 The proposed M55 link road is a project I have been working on for several years and one that I know is close to the heart of local residents. This has been a long endeavour, and I have been frustrated at the delays. The £24 million scheme is fully funded once again, after two packages of funding fell away earlier this year. I would like to thank the Prime Minister and senior ministers for responding so positively to my intensive lobbying, after the Government committed the missing funds and I am pleased to see Lancashire County Council will this month (August 2020) start the tender process for groundworks on the road.

Pre-works have already been completed, with BT Openreach completing a near-£1 million project to remove National Air Traffic cabling from the site.

I attend regular meetings with Lancashire County Council, Fylde Council, the Lancashire Enterprise Partnership and others to press this project on. It is a complex endeavour with funding from multiple sources, and legal agreements needed with a number of different landowners.

Here are some of my most recent actions to ensure this road gets built:

3 September 2020
Lancashire County Council's cabinet meet to discuss drawing down its money for the project, and to begin the tendering process for the £11 million earthworks contract.

4 August 2020
The Government announced the M55 link road will get the full £5.8 million from the Getting Building Fund following our bids made via the Lancashire Enterprise Partnership, and our appeals to ministers, Secretaries of State and the Prime Minister. The funding replaces the lost £1.8 million from the Growth Fund, and the Homes England funding.
I requested these funds from Government after lobbying the Prime Minister twice including at Prime Minister’s Questions, and held further meetings with senior cabinet ministers to make the case for the project.
We now have a fully-funded scheme once again and I expect the legalities to be completed quickly so that we can get shovels in the ground.
It is more important than ever, as we begin the recovery from coronavirus, that we do everything we can to kickstart the economy, and getting this road built will be a huge boost for Fylde.
Announcing the funding, Communities Secretary Robert Jenrick said: “As we get Britain building we are also laying the foundations for a green economic recovery by investing in vital infrastructure for local communities, creating jobs and building environmentally-friendly homes with a huge £1.3 billion investment announced today.
“This Government is determined to level up all parts of the country and this funding will not only give a much-needed boost to our economic recovery, it will help build the good quality, affordable homes the country needs.”

24 June 2020
I highlighted the M55 link road to Prime Minister Boris Johnson as he welcomed the lifting of some coronavirus measures - and invited him to Fylde for a haircut in the process.
During Prime Minister's Questions, I said: "May I welcome the measures that the Prime Minister has announced today, which will be a real boost to the visitor economy? Other Members have invited him to come for a drink in their constituency, but may I invite him to Fylde to get his hair cut?
"While he is here, he will have an opportunity to realise why it is very important, as part of the levelling-up agenda, to give the green light to projects such as the Lytham St Annes M55 link road, which will ensure that the visitor economies of areas such as Fylde are connected and well served for years to come."
The Prime Minister told me: "I am not sure I can wait until I get to Fylde to have my hair cut.
"Certainly, my hon. Friend’s appeal for the M55 relief road is well judged and has been heard by those on the Government Benches, and of course he should look forward to the further steps in the infrastructure revolution that we will be unveiling."

11 June 2020
Held an online conference with the Lancashire Economic Partnership chairman and officers to re-engage the LEP with the project and to find a way forward to identify missing funding.

10 June, 2020
At Prime Minister's Questions, I said: "Hospitality and tourism businesses on the Fylde coast are concerned about their path to long-term recovery and the infrastructure needed to support that.
"Central to the issue locally is the M55 link road, a project that was fully funded but had an issue with some funding allocations. Will the Prime Minister put his weight behind this issue and help me to secure the £5.7 million needed to complete this shovel-ready project?"
The Prime Minister told me: "What I can say is that we will unite and level up with infrastructure projects across our country. I congratulate my hon. Friend on his lobbying for that particular scheme and can tell him that last year we put £31 million into the Preston western distributor scheme, which is a new dual carriageway that will reduce congestion in Preston and lead directly to the creation of 3,000 houses and more than 500 jobs.
"As for further expansion of the M55, my hon. Friend will have to wait, but there will be further announcements in due course."

8 June 2020
I attended a meeting with Secretary of State Robert Jenrick to further discuss my concerns over the withdrawal of the Homes England Funding and the clear issues used in their reasoning. I asked the Secretary of State to identify new funding to be used to ensure the remaining £19 million of funds would not fall away.

26 May 2020
Met with Chancellor of the Exchequer Rishi Sunak to highlight the economic benefits the M55 link road would bring; better access to the Blackpool Airport Enterprise Zone, and unlocking housing sites (ie the link road has to be built before the Queensway site can be fully developed).

7 May 2020
Transport Minister Chris Pincher wrote back to me explaining the withdrawal of the HIF funding - in part due to the fact Homes England took so long leading to the loss of the Growth Deal Funding. Because of the loss of the Growth Deal Funding, Homes England would not consider the project fully funded. Some of the reasoning given to the minister by Homes England used incorrect data, and I joined Fylde Council in writing back to highlight the errors in their calculations. Homes England had stated the scheme no longer offered value for money, however they did not use the correct housing figures and regardless, we highlighted several other more expensive schemes funded by Homes England which delivered even fewer houses than their incorrect figures.

30 April 2020
Confirmation of withdrawal of funding from the Lancashire Economic Partnership and Homes England.

23 April 2020
I wrote to Secretary of State for Transport Robert Jenrick to highlight the scheme and the need for haste with the funding agreements due to the imminent deadline for the Growth Deal Funds.

27 March 2020
I wrote to Minister Chris Pincher highlighting the M55 project and the need for haste with the scheme, for fear we would lose the £2 million Growth Deal funding from the Lancashire Enterprise Partnership. He told me plans were progressing but a deal would not be signed off until August.

13 February 2020
I met with Minister for Arts, Heritage and Tourism Helen Whately, after I called for better roads and rail services during a debate on the tourism industry.
I met with the Minister and told her that it is all very well and good having great seaside resorts, but not if we do not have the right infrastructure in place to get people to and from them.
I asked for the meeting to discuss how the Government can support tourism in Fylde by funding better services and infrastructure.
I highlighted the need for movement on the M55 link road which we desperately need to see built as soon as possible. I told her that while initial works had taken place, we were awaiting the start of full construction of the road following the completion of the last legalities.

29 January 2020
I, and Blackpool South MP Scott Benton, wrote to Grant Shapps in his capacity as Secretary of State for Transport, and the Northern Powerhouse Minister, to ask for funding for the M55 link Road and the South Fylde Railway line. We detailed the number of homes the M55 link road scheme would unlock, and also the importance of it to the Blackpool Airport Enterprise Zone.

A few milestone moments from 2019:

25 July 2019
During the Priorities for Government debate, after the election of Boris Johnson to the leadership of the Conservative Party, I spoke in Parliament and said: "I welcome the Prime Minister to his role and his commitment to infrastructure in the north of England. Will he commit to the Government continuing to invest in small projects across the north of England, such as the M55 Lytham St Annes bypass?"
The Prime Minister told me: "I lost count, in the course of the recent campaign, of the number of dualling schemes and bypasses that I seemed to commit myself to. I will certainly make sure that we invest massively in road. Although I believe passionately in mass transit, there is no doubt that for many people investment in improving our roads is absolutely essential for economic progress."

March 2019
Preliminary works on the replacement M55 link road started.
Workers from BT Openreach began moving National Air Traffic Service cables from Blackpool Airport ahead of the main construction of the road.
I was delighted to see actual work taking place which demonstrated a £1 million commitment to this fully-funded road project.

I would like to take this opportunity apologise for the length of time this project has taken to come to fruition, but I genuinely believe we are almost there now.

I want to see this road opened as quickly as possible, and I will not rest until I see shovels in the ground.

Fylde MP Mark Menzies has welcomed the start of pre-works on the M55 link road project.

The proposed link road would connect the existing roundabout at Whitehills Road to the north with Heyhouses Lane near the Cypress Point development site to the south.