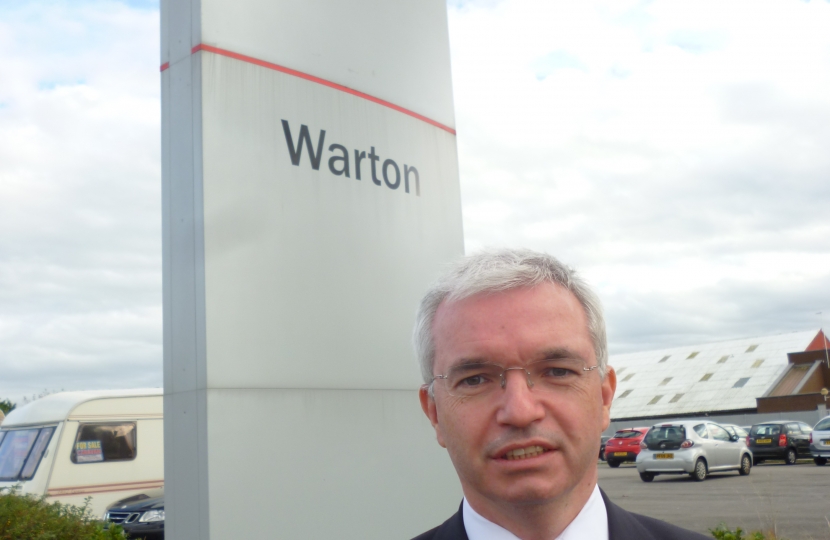 The Government has awarded a £317 million contract to BAE Systems – which will sustain 120 highly-skilled engineering jobs at Warton.

Fylde MP Mark Menzies has welcomed the announcement of the contract to develop the next generation of radar for the Royal Air Force's (RAF) Eurofighter Typhoons.

BAE Systems and Leonardo have been awarded the contract to develop the Active Electronically Scanned Array (AESA), the European Common Radar System Mark 2(ECRS Mk2) radar, to a standard ready to be integrated on to RAF Typhoons.

It will sustain more than 600 highly skilled jobs across the country, including more than 300 at Leonardo's site in Edinburgh, more than 100 electronic warfare specialists at the company’s site in Luton, and 120 engineers at BAE Systems' site in Lancashire.

Fylde MP Mark Menzies said: “This is great news for BAE Systems on a number of fronts. The funding secures 120 highly-skilled engineering jobs, and it also demonstrates the world’s best dual-role fighter, built here in Warton, can still be improved further and remains an attractive option for air forces around the world.

“The new upgrade will help future-proof Typhoon and help integrate systems yet to be designed into the aircraft.

“I was delighted to see BAE Systems’ commitment to apprenticeships in Lancashire earlier this year – it is clear these new young employees face an exciting time.”

The ECRS2 is a multi-functional array (MFA) that will give UK Typhoons a world-leading Electronic Warfare capability, in addition to traditional radar functions, including wide band Electronic Attack.

It will equip RAF pilots with the ability to locate, identify and suppress enemy air defences using high-powered jamming. They can engage targets whilst beyond the reach of threats - even when they’re looking in another direction - and operate inside the range of opposing air defences, remaining fully protected throughout.

This game-changing capability will replace the mechanically-scanning radar that RAF Typhoons are currently equipped with and will ensure the UK retains the freedom to deliver air power wherever and whenever it is needed.

It also enables the Typhoons to link up with future data-driven weapons to combat rapidly evolving air defences, ensuring that UK Typhoons can continue to dominate the battlespace for years to come.

Andrea Thompson, Managing Director Europe & International for BAE Systems’ Air sector, said: "This capability will allow Typhoon to take its place in the future battlespace for decades to come, maturing key technologies for future combat air systems and ensuring interoperability. As well as securing highly skilled jobs, it will sustain the key skills needed to keep the UK at the forefront of the global Combat Air sector. We look forward to continuing to work alongside the Eurofighter nations and our industry partners to ensure Typhoon delivers the needs of today and answers the challenges of tomorrow.”

Mark Hamilton, Senior Vice-President Electronic Warfare, Leonardo, said: “This contract is great news for the UK, which will get the world’s most capable fighter radar, and great news for British engineering. Inventing, developing and building advanced technology here in the UK allows us to understand and meet the specific requirements of our Armed Forces and to secure export orders all around the world, boosting the whole UK economy.”

The new radar will be based on AESA technology and will provide game-changing capabilities based on a revolutionary MFA.

It has significantly more Transmit-Receive Elements than other radars, making Mk2 the most capable fighter AESA radar in the world, maintaining the same power and precision of traditional radars but also enabling the simultaneous operation of its wide-band Electronic Warfare functionality.

BAE Systems, the UK’s prime contractor for the Typhoon, will integrate the new sensor which will be developed by Leonardo, the UK’s defence electronics champion.

Both companies are currently working as part of a four-nation development programme alongside Eurofighter consortium partners in Germany, Spain and Italy on a baseline version of the AESA radar. The ECRS Mk2 is a completely new approach designed to meet the operational needs of the RAF and future export customers.

The UK's commitment follows a similar commitment from Germany and Spain to deliver their own national requirements for an AESA radar.