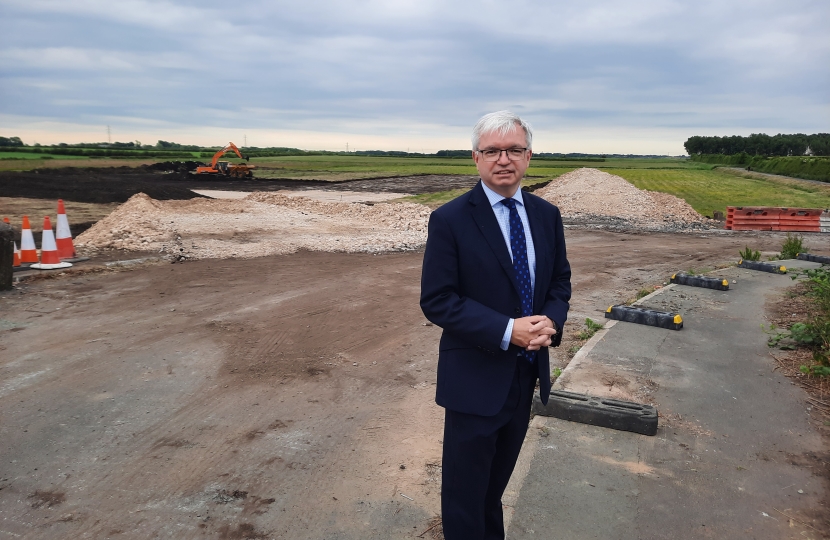 The firm, appointed to carry out the earthworks part of the contract on the £27 million link road, moved onto the north end of the road last week and started construction of its compound.

Fylde MP Mark Menzies said: “The M55 link road works are now under way. Finally. I have fought many a battle and waited a long time to be able to say that.

“The huge sign installed at the Whitehills end of the road has attracted a lot of comment and it is fantastic to see work under way.

“We have had so many issues to deal with over the years with the developers, with some of the landowners and legalities, and constantly-changing funding packages.

“Lancashire County Council stepped up to the mark and Fylde Council doubled its contribution to the project to get it done. I lobbied ministers including the Chancellor and Prime Minister to secure Government funding and our vital link road is now being built.

“This is far more than just a road - it will help unlock the economic potential of St Annes and Lytham for many years to come.”

The deal to build the link road was finally signed in March after all landowners agreed to give access and sell land where needed.

The Government made the scheme one of 10 ‘shovel-ready’ projects to be funded in Lancashire by the Government’s Getting Building Fund, after Mr Menzies lobbied the Prime Minister and Chancellor to replace Growth Deal and Homes England funding which had been withdrawn. Lancashire County Council and Fylde Council both increased their funding to ensure the scheme went ahead.

DUO will 'preload' the ground for the new road and construction will follow when the ground has stabilised. The link road project is expected to take around 30 months to complete

The former single-track Moss Road which had to be closed following several collapses will be repaired and reopened as part of the scheme; it will be a bridleway, cycleway and path for pedestrians, away from the new road.

Fylde MP Mark Menzies has welcomed the news that more than 34,000 people in Fylde have received their Covid booster or third jab on the first anniversary of the UK kick starting its vaccines drive