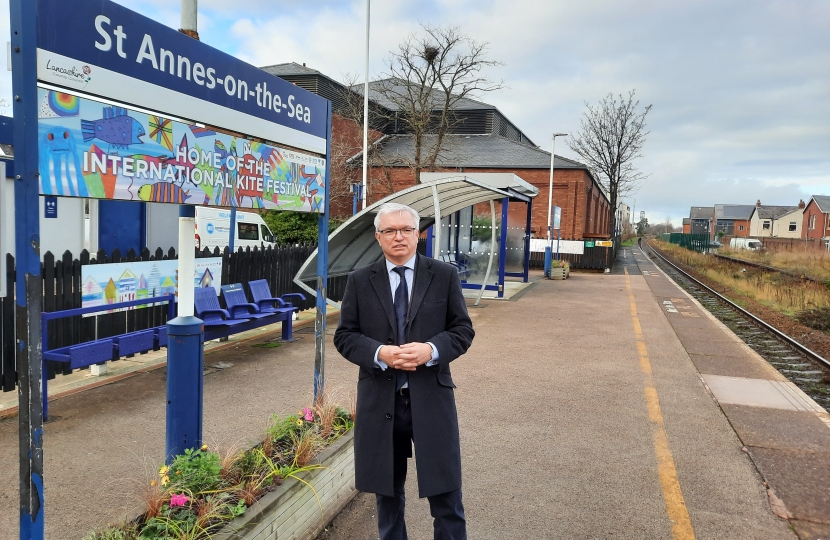 Plans to double rail services on the South Fylde line have taken a major step forward after a bid from MPs Mark Menzies and Scott Benton won Government backing and funding.

The MPs lodged a Restoring Your Railway bid earlier this year, aimed at replacing the lost second rail on the line with a passing loop, which would allow an increase in services.

The bid, one of 51 lodged nationally, was confirmed as successful in the Chancellor’s Autumn Spending Review.

Fylde MP Mark Menzies said: “This is great news. I have always campaigned for improvements to this line, and have long called for a passing loop or similar to enable us to increase services.

“Ever since the second line was removed in the mid 1980s, this line has declined. One service per hour is simply not enough for it to be a viable choice for commuters, students and visitors.

“Doubling services means better connections into the wider rail network and will help drive more visitors into our tourism economy.”

“The reliability of this line has been appalling. Installing a passing loop will improve reliability as well as double services.

“We have a station at Blackpool Pleasure Beach, one of the country’s best and biggest tourism attractions, and it is unthinkable it is so poorly served. That is about to change.”

Announcing the funding, rail minister Chris Heaton Harris said: “The scheme has continued to generate a high level of interest, with 51 applications received for this round. I am pleased to confirm that your application has been approved. Congratulations on progressing to the next stage. My officials and I very much look forward to working with you.”

The Department for Transport will contact lead authority Fylde Council to instigate the feasibility study in the next few weeks.