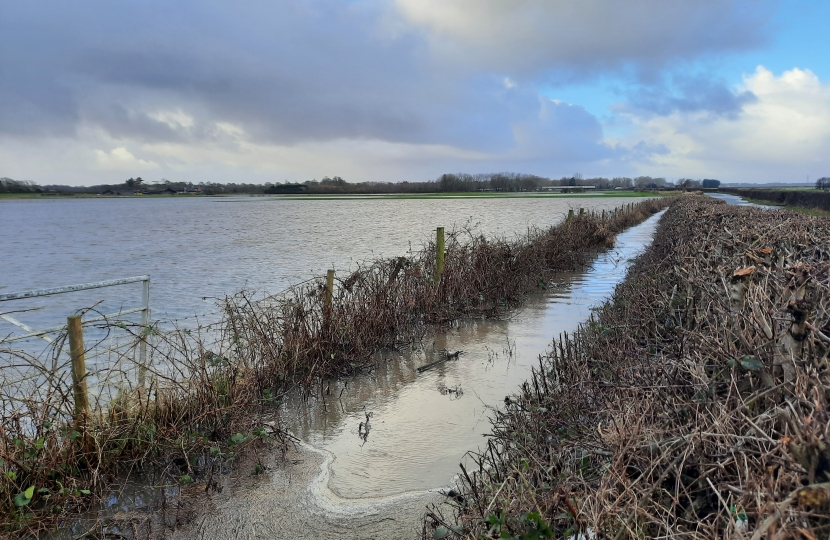 Flood agencies must do more to protect homes and farmland in Fylde, MP Mark Menzies said.

Mr Menzies said: “We have Lancashire County Council as the lead local flood authority, United Utilities and the Environment Agency responsible for flooding issues across Fylde.

“However we are seeing more and more frequent floods and seemingly little action to prevent them.

“Agencies are quick to point to each other but we need to see definitive action to protect homes and livelihoods.

“I’m pleased to see Fylde Council has brought together a new committee, led by Coun Tommy Threlfall, to explore these problems and find a way forward. Officers are already looking at a new way to alleviate flooding on one of Fylde’s main drains and I have written to Government and the Environment Agency in support of their bid.

“We have areas which have been flooding at an increasingly frequent rate which were promised action years ago – and very little appears to have been done.

“This week my office has been in touch with three flooding agencies and has also been in touch with four separate entities which record flooding issues and offer help – there are far too many people and organisations involved and the entire system needs simplifying.

“I have farmers losing crops and residents living in fear of rising water in areas where we should be able to protect them. More must be done to help them.”

Rains before and during Storm Christoph brought flooding to villages across Fylde, and farm fields to the North of Lytham, served by Liggard Brook, Main Drain and Wrea Brook, were left under several inches of water.

Mr Menzies added: “I have asked the agencies not what they can do, but what they need to get the problem solved. Instead of telling us what they could do to help with the resources they have available, I want to know what level of investment is needed for a scheme to stop or significantly reduce the amount of flooding in these areas. We can then ask the Government for that funding.”

Fylde MP Mark Menzies has welcomed the clarity from the roadmap out of lockdown after Prime Minister Boris Johnson detailed a four-stage relaxation of rules - so long as the number of Covid cases continues to fall.