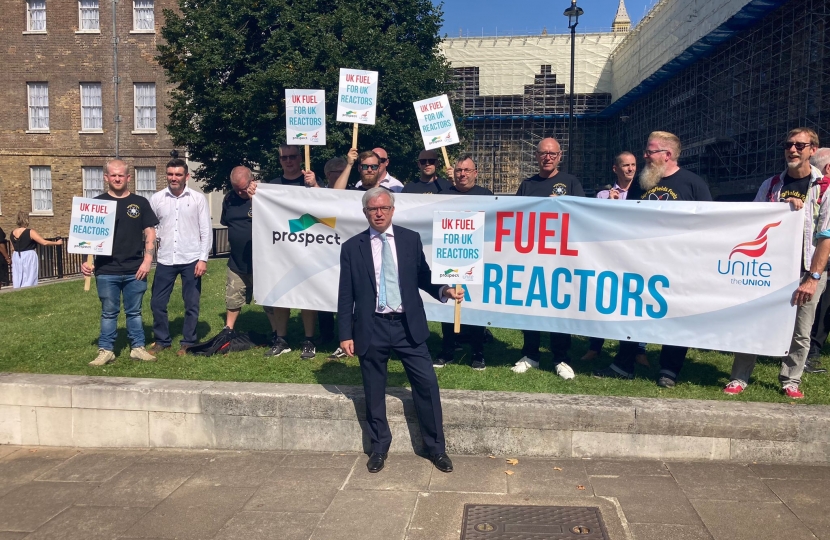 The Fylde MP met with union leaders and workers on College Green ahead of the debate in Parliament.

Some 70 per cent of Springfields’ income is related to AGR fuel manufacture, which is seeing a sudden drop off in demand due to the early closures and uncertainty around Dungeness B, Hinckley B and Hunterston. Existing orders from the site could end in 2023.

Mr Menzies said: “This really is an urgent situation. This is not a situation where retrospective action can resolve the issue.

“We are also waiting on decisions from Government over the next generation of reactors, the SMR fleet, with Sizewell C and other proposals still to be approved. Construction will take several years, meaning a lengthy gap until Springfields manufactured fuel will be in use.”

There are 800 highly-skilled workers at the Springfields site, with thousands more in the supply chain and associated businesses.

Mr Menzies said: “There is a world class skills base at the site with plenty of opportunities on the horizon, particularly from the latter part of the decade and the Government needs to take a long-term view of this industry. With no similar facility existing in the UK, these skills will be nye on impossible to replace.”

If those skills are lost, the UK would have to rely on nuclear fuel; manufactured abroad, reducing energy security.

“This is an industry that has a great future but once that needs the certainty of Government support on investment and projects.

“These employees are world class at what they do and are ready to take on these new challenges.

“The Government must work with industry to get UK fuel demand produced in the UK and give the go ahead to the projects that will create these orders.”

Energy Minister Amanda Solloway replied: “It is vital we maintain our sovereign fuel manufacturing capability. The UK is a world leader in the nuclear fuel cycle which is testament to the highly-skilled workforce at Springfields.

“Maintaining that skilled workforce is critical to our Net Zero ambitions.”

The minister said she was aware of the short-term issues with the forthcoming fall in demand for nuclear fuel domestically, but added that it was soon to be an ‘exciting time’ for the nuclear industry.

She added: “Nuclear has an important role to play in decarbonising our electricity production.. and we will bring forward legislation in this Parliament to create more nuclear power in this country.”

She detailed the £385 million funding to look into new small modular and advanced modular reactors, and the further £46 million for an advanced fuel cycle project specifically at Springfields.

Ms Solloway added: “The Government recognises the importance of maintaining a strong skills base in the UK and we have been working with Westinghouse and the National Nuclear Laboratory to support that workforce.

“Further Government support is under review as part of the Spending Review and meetings will continue this month with Westinghouse.”

Mr Menzies said: “I’d like to thank the minister for a very thoughtful reply.

“There are many audiences listening today to what is being said; investors looking to potentially invest in the UK will take heart from what she has said. The workforce have heard a clear commitment from Government to secure a future for Springfields and to invest in the next generation of nuclear reactors which will be fuelled in the UK.”