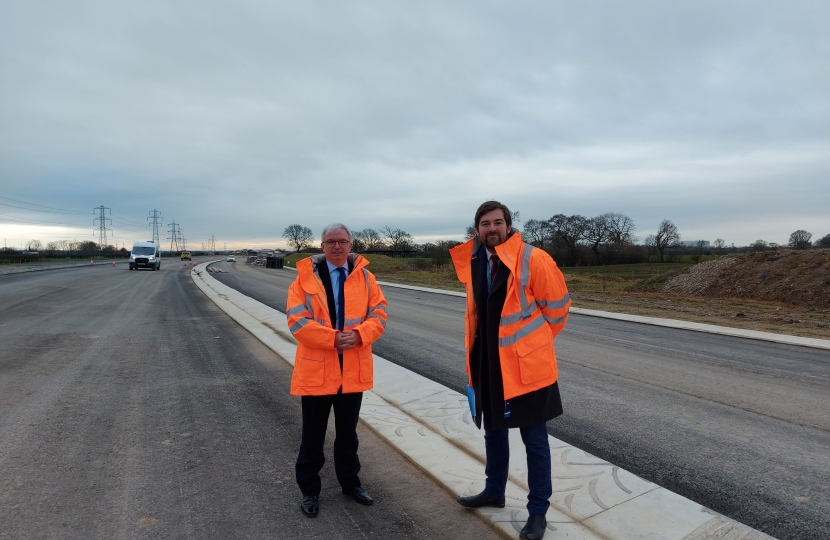 Fylde MP Mark Menzies is encouraged by the progress being made to deliver a vital new motorway link.

Mr Menzies joined Lancashire County Council transport portfolio holder Charlie Edwards on a visit to the construction site of the new Preston West Distributor road, which will link Fylde to a new junction on the M55.

Sections of the route are fast nearing completion and Mr Menzies was staggered by the scale of the scheme and the pace at which work is progressing.

He said: “The Preston West Distributor is a vital scheme for Fylde, speeding up journeys to the motorway network.

“Once this is finished there will be a dual carriageway all the way from the M55 virtually to the gates of the Warton Enterprise Zone.

“It will not only make it easier to reach key locations in the constituency, driving investment, but will help take traffic off local roads and through villages like Wrea Green.”

The road is scheduled to open in April next year and significant milestones in its construction have already been reached.

The £11m Lea Viaduct, crossing Lancaster Canal and the Blackpool to Preston rail line, is ready to be surfaced and a concrete is being poured on a second major bridge over the Ribble Link south of Lea Town.

Mr Menzies said: “It is only when you are up close you appreciate the scale of the project and the engineering involved.

“We have a new junction taking shape on the M55

“We have two massive bridges and links being delivered into the local road network and now plans for a new railway station.

“All of this has been delivered while traffic has kept flowing and trains have continued to run.

“The engineers working on this project deserve every credit, not only for how the work has been carried out but in how they have planned for the future.”

The Preston West Distributor is one of three major road schemes in Fylde, in which more than £300m is being invested.

National Highways is due to begin the next stage of construction on the A585 Singleton bypass this month.

Work also continues on the Heyhouses Link, the new Moss Road which will connect St Annes to the M55.

Mr Menzies said: “It is fantastic to see spades in the ground on all of these schemes which will be completed over the next two years.

“I continue to closely monitor progress, particularly on the Moss Road which I fought hard to deliver.

“These projects are so important for Fylde, for local residents and businesses.”