MP calls for landmark building to be protected 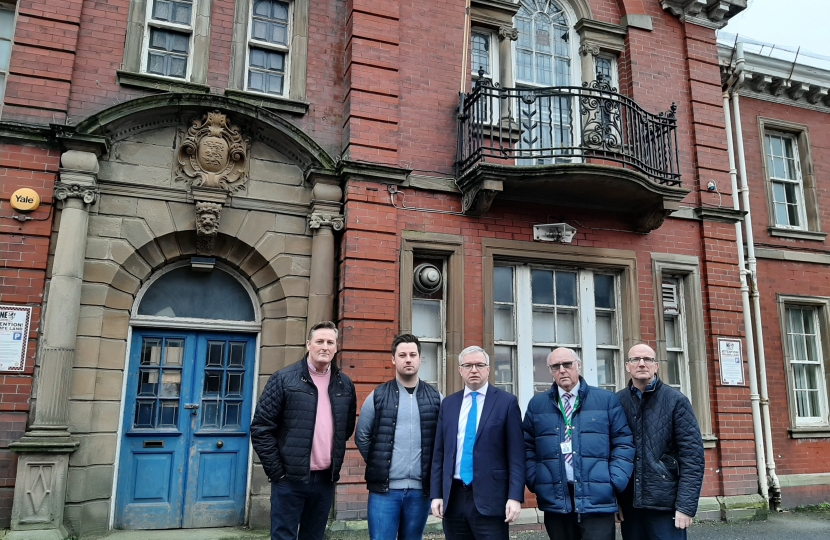 Fylde’s MP and Lytham councillors have joined forces to call for action over the state of a Grade II-listed Lytham landmark.

MP Mark Menzies and Couns Michael Sayward and Peter Anthony wrote to Fylde Council to ask for action over Lytham Police Station and Magistrate’s Court, which is in private ownership but has been allowed to deteriorate and has become unsafe.

Mr Menzies said: “The interior of this building is now a complete mess with plaster hanging off the walls, the old courtroom which was protected stripped out many years ago, and birds have left an almighty mess in all of the rooms. There is furniture all over the place.

“I fear the remaining heritage features, such as the beautiful stained-glass roofs, will soon succumb if they are not looked after.

“It is imperative the council gets in touch with the owners and starts a programme to save this building from further ruin.”

He was joined in contacting Fylde Council by Coun Michael Sayward who said: “The building is in a terrible state but should be one of the most attractive buildings in town.

“It is making the area look untidy. I would love to see something done with it to keep the heritage features while creating better footfall for Lytham. We need to see a plan of action from the owners.

“I asked the council to make the building secure once again after it became clear anyone could access it through broken windows.

“I want to see the council’s conservation officers taking action to ensure we do not lose any more of the beautiful features in this building.”

Coun Peter Anthony, who also contacted the council, added: “It is appalling the damage to the building. It is a unique building and the best example of an Edwardian building in the town.

“It is vital we take action now to protect it for future generations or more of the building will be lost forever.

“It must be preserved according to its listing. It must also be improved for the sake of those living nearby, it is simply unfair for neighbours to see it falling apart.”

Several years ago, the wooden cladding from the main courtroom was sold on the Internet, despite the listing of the building.

And urban explorers, those who wish to highlight closed architectural and historically-significant buildings, entered the premises and filmed the interior. While entering the premises was illegal, it is understood the explorers caused no damage.

I’m incredibly sad to see the first Coronavirus deaths have been registered here in Fylde.