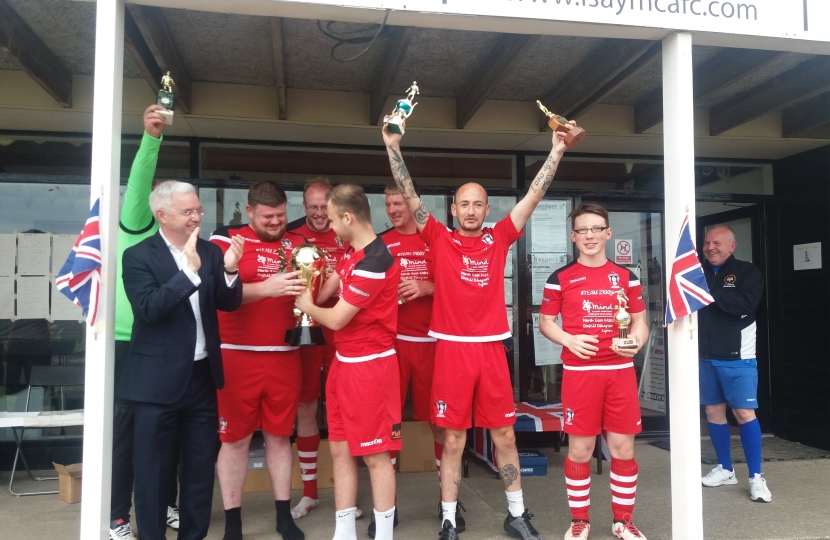 I attended the eleventh annual Disability Football Tournament on Saturday at Seafield Road in Lytham.

Teams from England, Ireland, Scotland and Wales competed in the seven-a-side tournament for players with all manner of disabilities.

It was a delight to meet the players and to see them enjoying a fantastic tournament organised by Luca Lanzani. Luca’s passion and drive for the tournament earned sponsorship from Lytham Round Table and the Richard J Wilson Sports Foundation, with support from McDonald’s.

He spends all year reclaiming and repurposing old unwanted trophies, many of which have been thrown out, to ensure every single player who takes part goes home with a memento of their participation on the day.

To see the grins on the players’ faces as they receive their trophies is fantastic. I would ask that anyone throwing out trophies, or who have some hidden away at home, consider giving them to Luca. Please contact my office should you be able to help and I will pass details on to Luca.

The row over bunting at our Club Day celebrations is ridiculous.

Lancashire County Council has told organisers they cannot hang bunting over streets or between certain lampposts.

I have written to Lancashire County Council’s chief executive to question why the authority has decided to suddenly enforce this legislation. I see no reports of bunting causing an issue in the past year - no accidents and no damage.

This appears to be a heavy-handed approach which is simply not necessary, and I want to see that bunting up in our towns and villages this summer.

I was sad to hear about the loss of Tom Westall in the past week. Thousands of you will know Tom as the face of Scouting in Fylde. He was given an MBE in 2012 for his services to children and young people, and he oversaw a great many developments in Fylde for our young folk, including the development of the new Scout headquarters on Heyhouses Lane. He was a great ambassador for young people and will be sadly missed.

I was also sorry to hear about the death of former councillor Keith Beckett, who recently stood down at the last election. He was a real champion for his Kirkham North ward and served residents tirelessly. Fylde’s councillors voted to make him an alderman of the borough at his last council meeting, and rightly so.

On a final note, congratulations to AFC Fylde for winning the 50th FA Trophy Final.

It was a delight to travel down to Wembley from Mill Farm and soak up the atmosphere before seeing the Coasters win the silverware. The previous week’s Wembley playoff loss to Salford was a difficult game, but AFC Fylde excelled themselves and did us all proud.