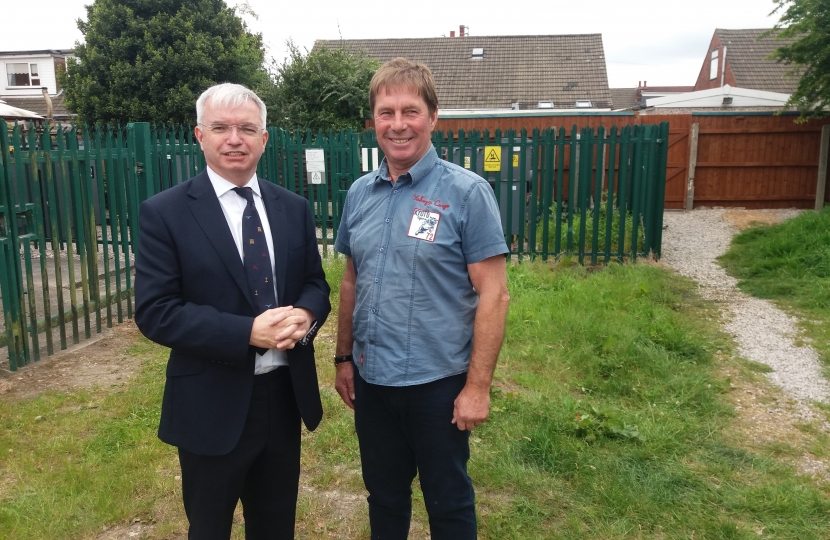 We spoke about the high street funding bid for Kirkham which Fylde Council has applied for, and which I have written to Government in support of. I’ll be chasing to see where the application is up to and when we are likely to see a response.

We also discussed St Annes town centre and we looked at some different funding pots which may be available to help improve the town centre. Fylde will be talking to St Annes Town Council to ensure we are all singing from the same hymn sheet. We want to see more shops in the town, and much better use of the buildings above the shops in The Square.

We’ll continue to look for funding streams to make sure we get our fair share of Government cash to improve our area.

I also visited Freckleton this week to look into a few matters with Freckleton councillor Tommy Threlfall.

I’ve written to United Utilities following our meeting to raise concerns over the road to the Lamaleach wastewater pumping station, close to the allotments.

The end of the road hosts a huge underground water tank and United Utilities vehicles regularly visit the site in heavy vehicles which are damaging the road.

I was also concerned to see a lot of standing water close to the adjacent Green Lane electricity substation.

Councillor Threlfall told me this had been reported some two years ago, but little appears to have happened so I will raise these concerns with the appropriate authorities.

I also caught up with Harry Whiteside to hear about the issues with salmon fishing on the Ribble.

Harry is one of the last few ‘Lytham Fishermen’ licence holders allowed to fish with nets on the Ribble.

All of this has happened at the same time the Environment Agency has withdrawn from activities to help salmon numbers increase. We risk losing a real heritage activity here; the fishermen are not commercial, but they now could not even cover the cost of the licence if they were to sell the 12 salmon they are allowed to catch.