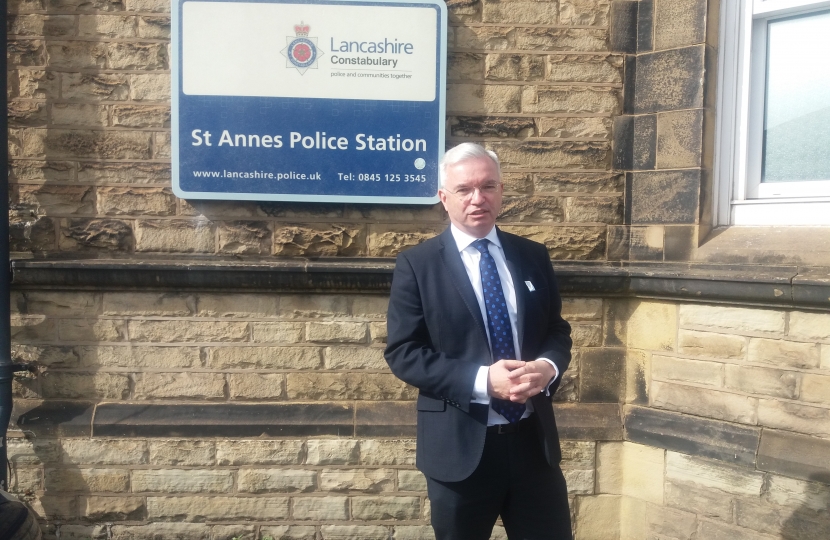 I want to see St Annes Police Station reopened and I will work with the Police and Crime Commissioner to ensure we have a base for new police officers in Fylde.

I am delighted the Prime Minister has pledged to recruit some 20,000 new officers and I know there’s an initial 200 on the way in Lancashire – I want to see as many of those as possible on the streets in Fylde.

It makes perfect sense to retain St Annes Police Station and get it back up and running again to ensure the extra officers we get have a base in the borough.

I’ll do everything I can to get that station back open and I hope we can gather as much support as possible to show how much we need that facility reopened.

I’m aware we were to have an initial extra sergeant and two officers in Fylde even before the Prime Minister announced the 20,000 extra officers. I have spoken to police chiefs and they are looking at the best models to use for extra officers.

I understand they will be used on designated operations at times, and used in neighbourhoods at others, giving police the option to put resources where they are needed.

I was also pleased to read more about the significant amount of increased funding for schools in Fylde. I mentioned last week that all three state-funded secondary schools and eight primary schools will have a large uplift in funding. The rise at one of the secondary schools is from around £3,500 per pupil to £5,000 per pupil in one fell swoop. That is welcome funding for our students, our teachers, and our school staff.

Negotiations are now taking place with the private sector funder for the M55 link road. All of the public sector funding, from Fylde and Lancashire County Councils, from Homes England, Highways England and the Lancashire Economic Partnership are secure and we await the signing of legal agreements from the private sector ahead of full construction.

On Brexit, the Prime Minister is still adamant wee will leave the EU on October 31, and will continue to fight for a better deal.

I believe the farcical press conference called by the EU this week in front of a mob of baying anti-Brexit protestors, was at best highly disrespectful, and at worse a real sign of the contempt which the EU has for the UK.