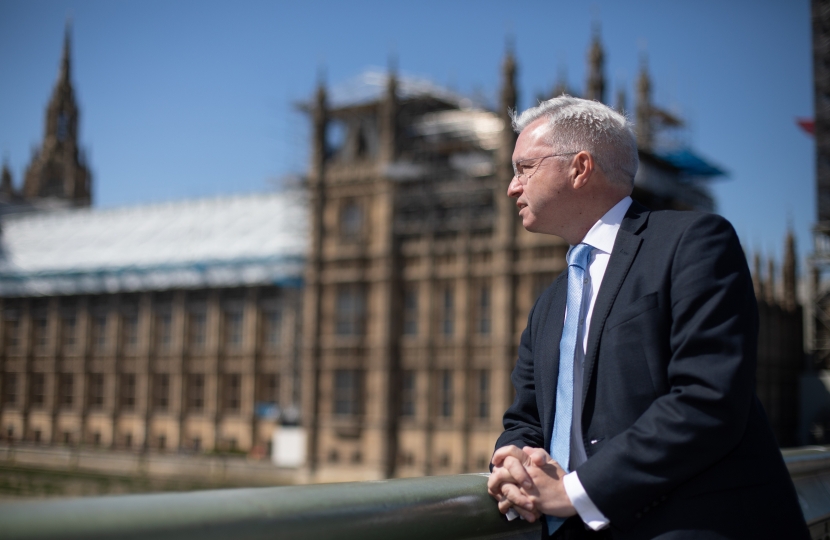 I initially became aware of the shale gas industry operating in Fylde shortly after my election to be the Member of Parliament in 2010. This was after the last Labour government introduced shale gas to the area, and granted Cuadrilla Resources a licence to drill in Fylde – PEDL 165 – after the 13th landward licencing round, which was completed on 6 February 2008.  For completeness, it must also be noted that the Labour Party not only introduced shale gas to the Fylde, it actively campaigned in support of the industry until 2016.

Throughout my time as the Member of Parliament for Fylde I called for stringent and robust regulation of the shale gas industry to ensure the safety of local residents. This led to significant progress being made, including regulations to improve the baseline monitoring of shale gas well sites, banning shale gas production in protected areas and introducing the traffic light system for monitoring seismic activity.

The traffic light system ensures that activity ceases as soon as abnormal seismic activity is detected and its upper limit, which was decided with input from the shale gas industry, is set at 0.5ML - a level which ensures the safety of local residents and their properties. Since hydraulic fracturing activities begun at Preston New Road we have seen these regulations in action several times, forcing the operators Cuadrilla, to pause activities for 18 hours and check all seismicity is in line with their hydraulic fracture plan before they can resume. But also and crucially, releasing this information to the public and keeping the local community informed. Had these world-class regulations not been in place we may have been in a very different situation to that of today.

I have been unrivalled in raising the issue of shale gas in parliament. This has included calling for and speaking in countless debates, regularly meeting with and questioning regulatory authorities and Government departments, and even being named as the MP who raised the issue most often.

This has also included my strong opposition to the proposed planning changes for shale gas sites, more details of which can be found at the bottom of this page.

The regulations I fought for were not merely obstacles for the operators to overcome, they were put in place to ensure the safety of the public could be guaranteed and it was for the industry to show that they could operate within them.

Hydraulic fracturing of the first well on Cuadrilla’s site at Preston New Road (PNR1z) began in October of 2018 and continued until December 2018. A total of 57 seismic events were recorded throughout this period, seven of which breached the 0.5 ML traffic light system limit.

Cuadrilla Resources began hydraulic fracturing operations on its second well at Preston New Road (PNR2) in August 2019. In the ensuing period, we saw more than 100 seismic events with nine breaching the 0.5ML limit. Many of these tremors have coming after hydraulic fracturing had ceased at the site, including the most serious, which was an event of 2.9 ML on the morning of 26th August.

The resulting consensus can only be that the activities that have taken place at Preston New Road over the past two years brings into question the suitability of the Fylde coast for hydraulic fracturing.

It is for this reason that I wrote to and met with both the Chairman of the Oil and Gas Authority and the Minister for Energy and Clean Growth, Kwasi Kwarteng MP, to make clear the views of my constituents – that hydraulic fracturing in Fylde must come to an end.

Following these representations, I was pleased to see that the Government has now announced that it will not grant any new hydraulic fracturing licences in England and that the planning process around exploratory sites would not be relaxed – an effective ban on the shale gas industry.

This decision was taken by Ministers immediately after the publication of the independent Oil and Gas Authority’s report into the hydraulic fracturing of PNR1z - the first well on Cuadrilla Resources’ site at Preston New Road. It is only fitting that the Government respond quickly and efficiently to the findings of a report of this kind and I welcome the decision taken by Ministers.

This is clearly a significant step in the right direction, however I will continue to question both the EA and the Oil and Gas Authority to ensure that they are fulfilling their responsibilities to monitor the remaining works at Preston New Road, especially to ensure that Cuadrilla adheres to the environmental regulations and planning conditions that have been imposed upon them.

Should you have any further questions or concerns, please do not hesitate to contact my office.

Read below for my work done on this issue.

The Ministry of Housing, Communities and Local Government's first consultation was held on the principle of granting planning permission for non-hydraulic shale gas exploration development through a permitted development right, as introduced through the 17 May 2018 joint Written Ministerial Statement on Energy Policy.

Permitted development rights are a national grant of planning permission. They provide a simpler, more certain route to encourage development and speed up the planning system, and reduce the burden on local planning authorities by removing the need for planning applications. More information on Permitted Development rights can be found here: http://www.legislation.gov.uk/uksi/2015/596/contents/made

I am clear on this - I strongly object to changing the existing law on permitted development rights.  Development of non-hydraulic fracturing shale gas sites should not be granted in this fashion.  The existing law requiring prospective shale gas exploration sites to receive planning permission from the local mineral rights authority should remain in force.

I appreciate that the proposed changes are only in relation to shale gas exploration and non-hydraulic fracturing operations to take core samples for testing purposes. This does not, however, allay my fundamental concern that such changes would remove key safeguards which prevent sites from being built at inappropriate locations.

I know from experience that though ultimately temporary, shale gas exploration sites are considerable constructions.  It is at this initial phase that planning authorities should be able to consider all the circumstances of the case.  It is stated at paragraph 10 of the consultation document that the Government remains committed to ensuring that “local communities are fully involved in planning decisions that affect them.”  I offer my support in upholding this commitment. It is however patently obvious that these proposals do not, which is why I do not and will not support them should the department decide to proceed with this policy.

The Department for Business, Energy and Industrial Strategy's consultation intended to gather views from industry, regulators and other interested parties on the timings and criteria for including shale gas production projects in the Nationally Significant Infrastructure Project (NSIP) regime under the Planning Act 2008.

Currently, any organisation wishing to undertake a shale gas development must submit their planning applications to local Mineral Planning Authorities under the Town and Country Planning Act 1990.

Taken in conjunction with the proposition that shale gas exploration sites could be given planning permission through a permitted development right, these proposals are deeply concerning.  In combination, these plans deny local mineral rights authorities the opportunity to scrutinise the suitability of shale gas sites at both exploration and production phase.

I do however, welcome the introduction of an overarching national planning body to ensure that planning policy in relation to shale gas is applied uniformly across the country.  This will ensure that there is not a significant proliferation in the number of sites in any given area, removing potential inconsistencies in the number of sites that develop across different local authorities.

Alongside what would be this welcome change, local authorities and local people must not be cut out of the planning process.  The danger is that these plans will completely bypass local people’s concerns and remove the substantive powers that local authorities have to properly scrutinise shale gas planning applications using the benefit of their knowledge of all the circumstances.

The Ministry for Housing, Communities and Local Government have launched a consultation in order to seeks views on whether applicants should be required to conduct pre-application consultation with the local community prior to submitting a planning application for shale gas development.

This approach has so far been taken when considering application which fall under the NSIP and for more significant onshore wind developments. I understand the merits of this, if it is implemented in the correct manner and planning protocols remain stringent, it could be an effective way of freeing-up the planning process and avoiding applications bouncing between appeals. What I absolutely cannot accept however, is this being used to loosen planning laws around shale gas sites and remove the input of local Mineral Planning Authorities – something that I have been clear cannot happen if informed and measured decisions are to be taken.

I also have reservations about the methods of consultation proposed. Whilst there are aspects I believe have merit, such as the minimum deadline period, sufficient publicity and making a statement available for public viewing, I believe that any consultation should be carried out by an independent body to affirm public confidence in the process.

More information on the consultation can be found at: https://www.gov.uk/government/consultations/compulsory-community-pre-application-consultation-for-shale-gas-development

Fylde MP Mark Menzies has called on the Government to ensure local voices are heard in the planning process for shale gas sites.