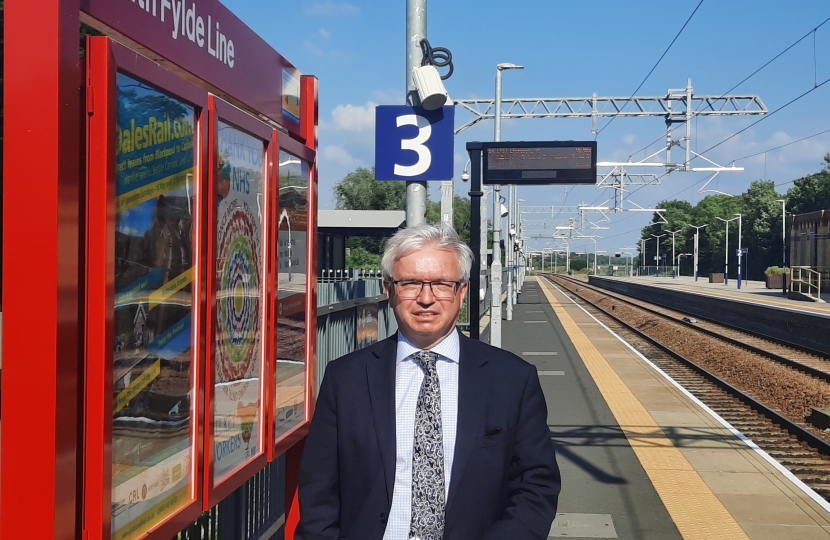 The Secretary of State for Transport has approved the funding grant for the bid to double services on the South Fylde line.

The approval and paying of the grant, not exceeding £50,000, means the Government is pleased at the progress being made by the bid team looking to introduce a passing loop on the line.

Mr Menzies said: “This line has had too infrequent a service, and too poor a record of cancellations in the past, rendering it unusable for anyone wanting to commute or get to college.

“Doubling services to two per hour makes it viable and better infrastructure will help increase punctuality and decrease the number of cancellations.

“It will not only improve access to the wider rail network for Fylde residents, it will also put more education and employment opportunities in the reach of those relying on public transport. It will also significantly increase the number of tourists to our coastal area.”

Fylde Council is acting as the lead authority on the project and has been working with Network Rail, Northern Rail, the Community Rail Partnership and the two MPs’ offices to press ahead with the bid.

Network Rail has been engaged to complete a capacity analysis, which includes looking at timetabling and platform space at Preston, and a further consultant will be appointed to complete a Strategic Outline Business Case.

I have campaigned for improvements to the South Fylde line, serving Kirkham, Lytham, St Annes and through to Blackpool South ever since I was elected. We now have a successful Restoring Your Railway bid to double rail services on the line through the installation of a passing loop.

This week we have seen the State Opening of Parliament, an important occasion on which the Government lays out its plans for the future. While it is always a grand occasion this week’s ceremony was touched with sadness as Her Majesty the Queen was unable to attend in person.